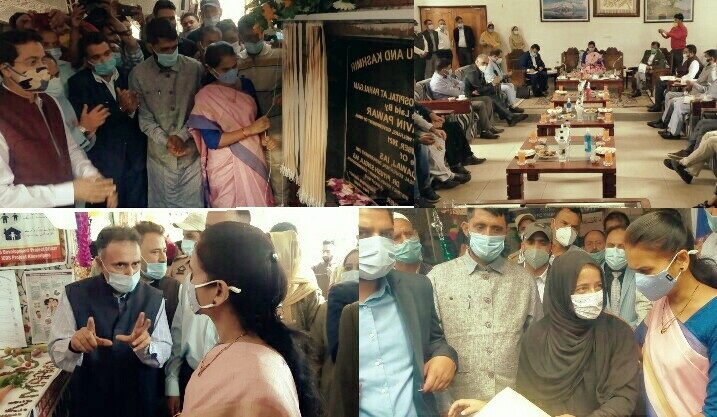 ANANTNAG, September 21: As part of the Union Government’s ongoing public awareness program, the Union Minister of State for Health and Family Welfare, Bharati Pravin Pawar, posed today hui the foundation stone of a 50 bed hospital in Pahalgam.
Speaking on the occasion, Dr Bharati said the government is committed to providing better health infrastructure and facilities to the general public. She said the vaccination program is running smoothly and successfully across the country with nearly 80 crore of inoculations carried out so far.
At PHC Pahalgam, Bharati addressed a gathering of health officials and also interacted with the local population.
Additional Chief Secretary, Health and Medical Education, Vivek Bhardhawaj, Chairman of the District Development Council, Mohammad Yousuf Gorsi, District Development Commissioner, Piyush Singla, Director of Kashmir Health Services, Mushtaq Ahmad Rather than other officers , PRIs and a large number of local people attended the foundation laying ceremony.
The Minister took part in a series of events and activities during the extensive public awareness program which saw the participation of public officials, elected officials and delegations in addition to beneficiaries of government programs.
With the president of the DDC, the DDC and the forestry agents, the minister took part in a planting campaign organized by the Ministry of Forests and called for making these pro-environmental activities part of our habits and routine.
Bharati inspected the stalls set up by various departments such as agriculture, horticulture, ICDS, health, welfare, looms / crafts, industries and commerce, youth services and sports, NRLM, animal and sheep farming, etc. them. She was informed of the achievements made by the respective departments in the centrally sponsored and flagship programs of the government.
The Minister interacted with the beneficiaries and praised them for social benefits in the form of sanction orders, hearing aids, motorized tricycles, etc.
Members of the DDC and BDC, the PRI and advisers as well as a number of delegations met with the Minister and interacted with her on various issues. They presented various demands regarding health facilities, including upgrading of infrastructure in their respective areas.
Bharati listened patiently to the representatives of the public and the delegations and ensured to respond to their real issues and requests within a specified time frame.
The representatives of the public and the delegations appreciated the efforts of the government to make the PRI / ULB accountable in addition to carrying out massive development work on the ground. They also thanked the Minister for carrying out a full-fledged awareness visit to the region.
Later, the minister visited Aru and provided an update on the pace and quality of the work being done on the sub-center under construction here. She insisted that the sub-center be established in accordance with standard guidelines so that quality health care is provided for people in the remote area.