As the country waves flags and celebrates the 75th anniversary of India’s independence, it’s also time to take stock. What did the founders and citizens of India dream of, how did India cope, what were our challenges and successes?

ThreadThe reporters and contributors of tell the time, the traumas but also the hopes of the Indians, through the testimonies, the culture, the economy and the sciences. How was the modern state of India born, what does the flag represent? How have literature and cinema approached the trauma of Partition?

On the night of August 14, 1947, as Indians across the country prepared to celebrate the impending announcement of independence from British colonial rule, a group of young students set out to march from the Oval Maidan into the south of Bombay to the famous Chowpatty beach.

The marchers called themselves the All India Students Congress, and among them was a 23-year-old medical student, GG Parikh. “The group, which had no official relationship with the Congress party, was formed in prison in 1942, when we were all detained after participating in the Quit India movement.”

Parikh, then a student at St Xavier’s, was among those who answered Gandhi’s call for the British to leave India, and was quickly arrested. “I was in prison for 10 months, and when I came back, the college took me back. I guess the fathers (of the Jesuit-run college) didn’t care.

The Student Congress marchers reached Chowpatty just before midnight. “People had gathered there, the atmosphere was festive, the lights were on everywhere.” Authorities in Bombay had said public transport would be free and crowds were arriving at popular spots such as the beaches and India Gate.

It was the night Pandit Nehru delivered his famous Tryst with Destiny speech at the Constituent Assembly and the crowds in Bombay – and everywhere else in the country – erupted in joy. “It was amazing,” recalls Parikh. The students broke off the march and joined in, but, like those who participated in the Quit India movement just five years ago, made their point: freedom had not just come , it had involved sacrifices.

Parikh was a member of the Congress party but was closer to the organization’s socialist group. In 1952, when the Socialists, who had presented their own candidates for election, Congress declared that there could be no other party within the party. “All the socialists left, and I was among them.” He remained a socialist all his life. Looking back today, the 98-year-old, still wearing his signature khadi kurta, Parikh doesn’t talk much about the hopes and dreams of the time and how the country fared. But he talks about how socialists continued to divide, some of them, including his close friends like George Fernandes, drifting away from socialist ideals.

During the emergency, Parikh was again imprisoned, this time for his involvement in the Baroda Dynamite affair, where several people, including Fernandes and industrialist Viren Shah, were arrested for intending to do jump off train tracks.

Fernandes was his friend and cellmate in Delhi during the emergency. Parikh had helped him disappear when the police were after the leader, but eventually the two were arrested.

“Fernandes was part of the Janata government, came out in favor of it and the next day joined those who, within the party, wanted to bring down Morarji Desai, the prime minister,” Parikh recalls. This reflects his own view of the development of India and Indian politics.

The socialists who were doing well when Dr. Ram Manohar Lohia led them and was their main ideologue, split in two in the 1960s and then split again and reformed. After the state of emergency was lifted, Parikh was offered a ticket to the 1977 elections, but he refused. He had realized that mainstream politics would require compromise.

“Even as a doctor, I was asked to give false certificates. As a member of Parliament, it would have been impossible to handle such requests.

Instead, he continued his practice, on the ground floor of the building in which he still lives. Parikh’s clinic has become well known in the region, and he has seen children grow up, become parents, and then their children grow up. 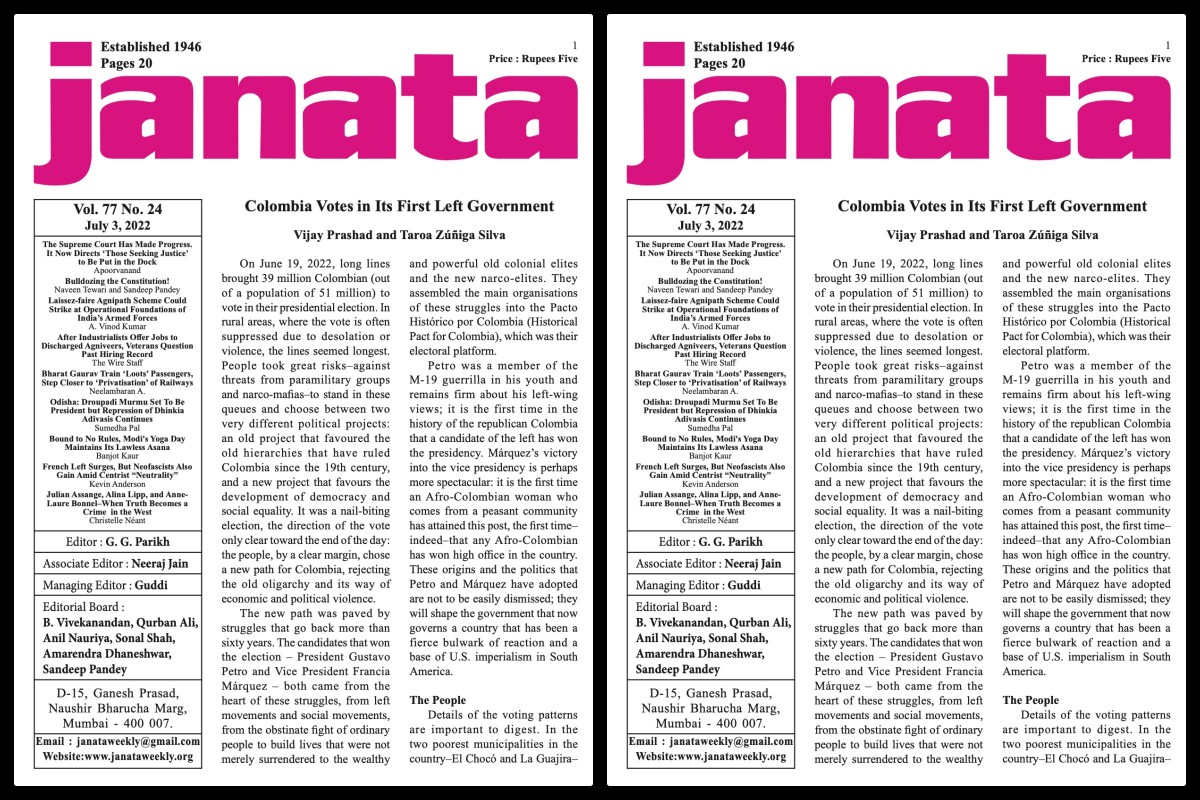 During the COVID-19 lockdown, Dr. Parikh gave up his practice. He is theoretically still the editor of the Janata weekly founded in 1946 by Aruna Asaf Ali and Edadata Narayan, which Parikh took over in 1952. But for the past two years, the magazine has been run by a younger team. He still has his loyal followers and followers and focuses, as he always has, on hot topics. A recent issue was a special edition on the liberation of Goa, something in which socialists were closely involved. The magazine retains that old spirit, when the Socialists were a group of vocal and visible politicians; and GG Parikh, who is very close to his own centenary, still embodies it today.