Hanoi (VNA) – Different issues in the construction and perfection of a Socialist state of law were discussed at a meeting held on October 19 chaired by National Assembly
(NA) President Vuong Dinh Hue.

The meeting is the second organized by the steering committee of a project to develop a “strategy for building and perfecting the socialist rule of law of Vietnam until 2030, with a vision until 2045 led by the president of AN Hue.

The participants considered and approved a draft report on question n ° 10 on the completion of the mechanisms of assignment of tasks, coordination and control between state agencies in the execution of the judiciary, and between agencies and organizations in judicial activities to meet the demands of building and perfecting a socialist state of law. 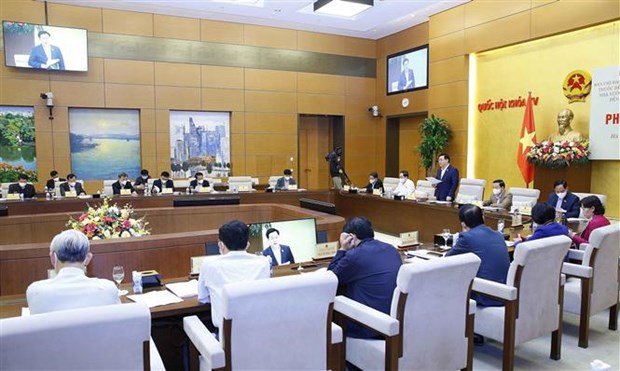 During the event (Source: VNA)

They voted on a draft report on question n ° 12 on the completion of the mechanism for the protection of the Constitution. Two sub-committees reported on the progress of the compilation of reports for issue 9 on the strategy to create and improve the legal system and to organize law enforcement by 2030, and the Issue 11 on reforming and improving the quality and effectiveness of NAs. Activities.

President Hue praised the views expressed at the meeting, noting that the model of a socialist state of law in Vietnam presents both the universality of a rule of law in the world and the socialist specificities of the country.

In view of this, the strategy development process should adhere to the relevant views of the Party and the state, the resolution of the 13th National Party Congress, as well as the socio-economic development strategy for 2021-2030. It must also take into account the post-2030 period, he added. /.