OIREACHTAS HEALTH COMMITTEE has formally asked Minister Stephen Donnelly for a further pause in a Cabinet decision on plans for the National Maternity Hospital (NMH).

Cabinet was due to approve plans for the hospital last week, but that was put on hold for two weeks due to continued criticism of the project and to allow Donnelly to appear before the committee.

Speaking to the committee this morning, Donnelly said the government intended to go ahead with the project, but he also left the door open for changes to the proposals.

“Although I think it is Cabinet’s intention to make progress in this area, in terms of exactly what is presented to Cabinet, I would not rule anything out,” Donnelly said in response.

Social Democrat co-leader Roisín Shortall TD also sought to quiz the minister on the plans’ two-week break, asking Donnelly if it could be extended further.

“Are you prepared to recommend to the Cabinet to wait a few more weeks? she asked, noting that the committee only had this week to review the plans.

In response, Donnelly said “that’s a matter for the Cabinet”, before adding: “Let’s see how this week goes, there’s been an awful lot of scrutiny.”

The committee is due to consider the matter again tomorrow and will hear from former NMH master Dr. Peter Boylan, who has been a vocal critic of the proposed move to the Elm Park site at St. Vincent’s Hospital.

Following today’s hearing, the committee has now written to Donnelly requesting additional time for Cabinet’s decision to allow for further consideration of the matter.

The letter to Donnelly asks the minister to give the committee more time before cabinet makes a decision. The request requires a response from the Minister as soon as possible.

The committee is also expected to write to St Vincent’s Healthcare Group asking them to attend a hearing next week.

Cullinane said after today’s meeting, it was important that the committee had “enough time to do its job.”

“The owners of the land are now St. Vincent’s Healthcare Group. It is quite normal that we hear them because many of the issues and concerns relate to land ownership,” he said.

In her opening statement to the committee earlier today, Donnelly said religion and women’s reproductive rights in Ireland “do not have a good track record” and therefore people’s concerns are valid.

The move of the NMH to a site on the grounds of St Vincent’s Hospital in Dublin has proven highly controversial as until recently the site was owned by the Religious Sisters of Charity.

The religious congregation has now transferred its ownership and if the relocation plan goes through, the state would lease the land for 299 years.

Donnelly told the committee that there must be “no religious influence, now or in the future” with the NMH that this goal is achieved by the current proposed structure.

“Ireland does not have a good record when it comes to religion and women’s reproductive rights. People are rightly demanding that when it comes to our new National Maternity Hospital, there is, and there can be, no religious involvement,” Donnelly said in her opening statement.

Dr. Rhona Mahony, who was the first female Master of the NMH.

Mahony referenced the Repeal the 8th campaign, which she describes as a “real moment”, and noted that she was one of the voices at the center of it:

In 2018 we all came together and we had a movement and we were able to speak out and express what happened to women. I think that was a pivotal point in our history in terms of breakthroughs and breakthroughs with women’s health. With this project, we are moving forward again. We completely say goodbye to the church, there is no religious ethos regarding St. Vincent’s Hospital, there is complete separation.

Answering questions from Sinn Fein leader Mary Lou McDonald at the Dáil today, Martin also insisted there was no ‘conspiracy’ behind the plans.

McDonald told the Taoiseach: ‘I want to tell you that the best way to allay the fears and solve this problem is for the government to secure full public ownership of the land.

“It would provide absolute, hermetic clarity. This would ensure the best protection of the interests of the state in what will be a very, very expensive project.

“The government must intervene, because by inaction you will accept and collude with an agreement and arrangement that does not adequately protect the public interest.”

However, Martin, who pointed to the urgent need for a new motherhood, said: ‘The 300-year lease, at 10 euros per year, is beneficial ownership and I have received legal advice to that effect.

Citing the legal agreement for the new hospital, he said: “I have read it all. There are no taxes. Basically, it says, “go ahead and build a maternity ward”.

I want to take this opportunity to provide the context for the decision to co-locate the new National Maternity Hospital on the grounds of Saint-Vincent Hospital. pic.twitter.com/0qXEzxLKVP

HSE legal adviser John O’Donoghue argued this morning that lease means someone ‘owns property for a specific period of time’.

“It is not the case that the state will not have a property right over the land,” he said.

O’Donoghue was responding to Cullinane, with the TD saying he himself was ‘not a legal expert’ but that the ambiguity around the issue ‘is a product of the state not owning the land’ .

Following a meeting last night hosted by Fine Gael and the Green Party on the proposed move, which was also attended by members of the NMH board, Justice Minister Helen McEntee said that the meeting had allayed his worries about the move.

“There are absolutely no circumstances in which I, as a legislator, but as a young mother, as a young woman, would accept anything other than a world-class national maternity hospital, which offers clinical independence and absolutely operational, but also providing the services that women in this country are legally entitled to,” she said.

Irish Maternity Midwifery Directors have voiced their support for the move to St Vincent’s grounds.

The directors have sent a letter to the Minister of Health outlining their support for the move from the current location of Holles Street in Dublin 2 to the Elm Park campus in Dublin 4.

In the letter, seen by The newspaperthe directors say they are unanimous in their support for the project.

“As a world-class institution providing 21st century maternal, newborn and women’s health care; this new hospital will continue to serve, not only women in South Dublin, but from all counties in Ireland where women need specialist care,” the letter states.

“We urge that the decision to move be approved as a matter of urgency, as a signal for the future development of maternity and women’s health care in Ireland,” it adds.

The letter was signed by Fiona Hanrahan, director of midwifery and nursing at Rotunda Hospital, and co-signed by 17 other directors of midwifery from maternity units and hospitals across Ireland.

She noted that it is signed on behalf of the National Forum of Directors of Midwifery.

The government and the Ministry of Health have repeatedly stressed that the clinical integrity of the hospital is preserved in its constitution and have defended the structure of the agreement.

However, activists, opposition TDs and some government officials have expressed concerns.

Yesterday, two members of the HSE Board reiterated their concerns about both ownership, as well as governance and control in a statement submitted to the Oireachtas Health Committee. 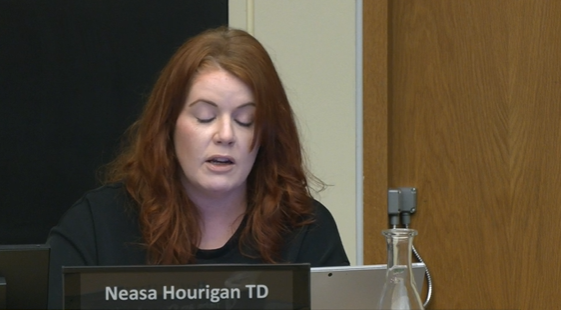 Speaking to the committee this morning, Green Party health spokeswoman Neasa Hourigan said she had a problem with the phrase ‘clinically appropriate’ contained within the framework of the new hospital.

Shortall also sought to focus on this “clinically appropriate” phrase, describing it as “highly problematic” and that it “will likely be challenged in court many times over the next 300 years.”

With reports by Céimin Burke, Christina Finn and Jane Moore